Chorltonian Ladies return to Brookburn Road tonight for the final time before their summer re-brand as they host FC United of Manchester Women in the North Women’s Regional Football League, 6:30pm KO. 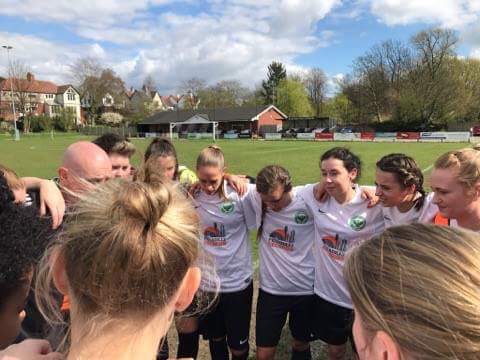 It’s a quick turnaround for Chorlts following a narrow 2-1 loss away to title challengers Warrington Wolverines on Sunday which saw them end a run of five games unbeaten.   FC United enjoyed a 12-0 thrashing of Stockport Couy Blues to keep them within three points of Merseyrail Bootle and, perhaps crucially, better their goal difference to 70 compared to Bootle’s 69. This isn’t FC United’s only planned visit to Brookburn Road this season as they will return in the final of the Manchester FA Women’s Cup when they take on City of Manchester FC on Friday 28th April, 7pm KO.

🎥 It wasn't enough to earn a point but watch Jordanna Shaw's goal for @ChorltsLadies against Warrington Wolverines today @WD_CFC pic.twitter.com/I1CPRXfA0a

This is the first time the two sides have met since playing in the semi-finals of the GMWFL Division One Cup in May 2015 when Chorlts ran out 2-1 winners. That was the fifth meeting of the season in which the two teams had met three times in the league with the two teams sharing 3-1 wins in the first two meetings before FC United won the third meeting 4-2 on their way to capturing the GMWFL title.  FC United also boast a victory in the Challenge Cup having won 2-1 at Chorlts in November on their way to winning the competition. However Chorlts weren’t too far behind them earning promotion to the NWWRFL as ‘Invincibles’ the following season.

This season FC United are looking to take the next step and earn promotion to the Premier Division of the NWWRFL as they chase down league leaders Bootle, thanks in part to Chorlts 1-0 win there last month, and are engaged in a three way battle for promotion with Warrington Wolverines battling just behind them.  With Bootle taking on Warrington this evening, the first of two meetings between the two sides, Chorlts will relish the role of party poopers with two meetings against FC United and the visit of Warrington still to come.

Elsewhere tonight, in the Premier Division, Manchester Stingers host Accrington Girls& Ladies at Whalley Range, 6:30pm KO with both sides in need of three points to keep clear of the relegation zone. A 2-1 defeat away to Burnley at the weekend means Stingers are currently four points clear of neighbours City of Manchester in the last relegation position with three games in hand.