The two sides had witnessed high scoring games during the league campaign as Heyside had ran out 6-3 and 4-3 winners on their way to the Second Division title and it was they who started the game on the front foot. The first chance came after a minute as an early through ball realised Jones but Bolton’s Ellie Dewhurst was quick off her line to clear the danger. 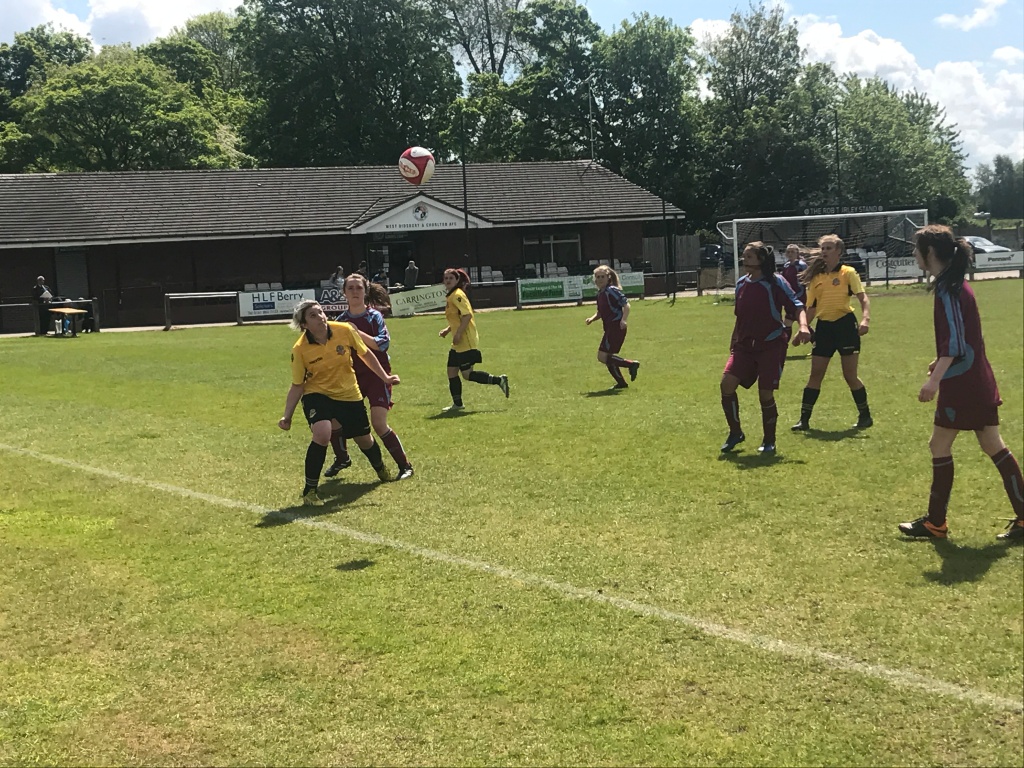 Three minutes later another excellent through-ball, this time by Natalie Gregory, put Lucy Shaylor through one-on-one but her effort flew just wide of the right hand post.  Heyside continued to dominate the early proceedings as Laura Day clipped through a delightful pass into the path of Nicole Denton, who rounded the keeper, but was denied by a superb block on the line by Abbie Goodwin.

Heyside were punished for their failure to convert their early chances when on 12 minutes a quick counter attack down the left from J. Musesoglu found Stacey Saunders in the middle and her shot from the edge of the penalty area snuck inside the bottom of the right hand post.

Despite the goal Heyside continued to push for their opener as Day was again denied by Dewhurst on 15 minutes one-on-one before Day, Lucy Shaylor and Bethany Boothroyd combined superbly in the final third only to be again denied by the quick reactions of the Bolton goalkeeper.

The Division Two Champions pressure was eventually rewarded on 24 minutes when a ball down the right fell into the path of Shaylor who, drawing out the Bolton keeper, finished superbly with a delightful chip from the edge of the area.

The two teams were level for just three minutes as Bolton immediately restored their advantage when Evie Sheppard’s low corner from the right found Musesoglu at the near post and she clipped her first time effort over the Heyside goalkeeper from 6 yards out.

Heyside again continued to create chances as Denton and Eve Burton both forced saves from Dewhurst; with the goalkeeper credited with ensuring that Bolton would head into the half with the lead.

The half was just two minutes old when Heyside found their second equaliser of the afternoon as a free from the left by Jessica Cooke found Emily Howarth at the near post and her effort squeezed inside the post.

Bolton almost immediately retook the lead as a hard struck free kick flew just over the bar. At the other end Heyside came close again to taking the lead for the first time in the match as Howarth saw her long range rocket off an effort pushed onto the bar by the boot of Dewhurst in the Bolton goal.

In the searing heat, the pace of the game finally began to relent as both teams began to cancel each other out. However that wasn’t the end of the scoring as Bolton took the lead for a third time when a terrific pass down the right found Musesoglu who burst her way into the penalty area but finishing confidently under the goalkeeper from close range on 69 minutes

Again, the lead would be short lived as four mintues later Heyside levelled when a low shot was drilled into the penalty area and despite being parried Denton was on hand to smash home the rebound.

It may have been the end of the goals but not the end of the drama as Heyside saw a corner flicked on into the path of Burton who in turn saw her effort cleared off the line by a Bolton knee. In the final minute of the game Bolton almost secured their victory as a Megan Dunford corner found Jenna Jowett at the near post and her first time flick clipped the underside of the crossbar.  Heyside finished the game the stronger of the two teams as first Howarth saw a flick towards goal role agonisingly wide of the post before a superb tackle from Bolton’s Melissa Cordwell denied Denton a certain winner with the last kick of the game.

So to penalties and it was Bolton who took the lead through Jackson when she drilled her penalty into the bottom left hand corner.  The first Heyside penalty was well held by Dewhurst as it was struck straight down the middle

Eventual player of the match Musesoglu made it 2-1 with confidently drilled her penalty into the top right hand corner. Heyside responded making it 2-1 with their second spot kick drilling it inside the right hand post.

The third Bolton penalty was drilled confidently into the top right hand corner to give them a commanding 3-1 lead before Heyside Eve Burton made it 3-2 with a hard struck effort beyond Dewhurst.

Bolton missed the chance to win it as Saunders saw her penalty cannon off the underside of the crossbar before Heyside’s stand in goalkeeper coolly made it 4-4 with a well struck effort high to the right.

Just as it looked like the game would never end the first round of sudden death spot kicks finally produced a winner as Megan Riley drilled her penalty home before Dewhurst saved the 6th spot kick, fittingly with her knee, before receiving the adulation of her team mates as they piled on her in celebration.

Bolton Wanderers collect their medals and the trophy! pic.twitter.com/BXtw7tkGNI