Curzon Ashton and FC United of Manchester both kick started their NWWRFL season’s with emphatic results against Crewe Alexandra and City of Liverpool respectively.

Kirsty Chambers lead the way for FC United scoring five goals, taking her tally for the season to 9 in two games, surpassing Jess Battle who notched four including a 31 minutes first half hat-trick. Battle herself already has 8 goals. Rebecca Foster, Fran Sullivan, Ella Schickoff each earned a brace whilst Yvette Lockes and Olivia Greenhalgh also scored.

Curzon completed a league double over Crewe Alexandra Development piling on the misery from their 3-0 home win last Sunday to score nine at the Cumberland Arena. Keeley Goodwin notched five for Curzon whilst there was also a first ever Curzon goal for Chloe Wild; a summer arrival from neighbours FC United.

⚽GOAL!! Keeley sprints down past the defence and slots it home. 1-0 Curzon pic.twitter.com/Yd2J8xAUx2

There was an impressive win for Altrincham as they defeated Northwich Vixense 5-0 at their Mersey Valley home. Megan Rowley grabbed four of them with the fifth coming from Kate Bryan. The perfect response for the Robins following their FA Cup exit away to FC United the previous weekend.

Locally in the NWWRFL, Manchester Stingers in the Premier Division and West Didsbury & Chorlton in the First Division South both fell afoul of the weather.

In the GMWFL First Division it was goals galore as four matches produced 24 goals in the second round of action. Didsbury sit atop of the Division with maximum points following an impressive 5-3 win away to Crompton.  Beechfield United picked up their first win of the season as they defeated Bolton Wanderers Development 3-2 at home.

Bolton Lads & Girls made it two wins from two as they defeated last season’s Champions Urmston Meadowside at home winning 4-3.  Bury’s Development squad picked up their first win of the season as they defeated Reddish North End 4-2 to leave the away side bottom without a point from their first two games.

In Division Two newly formed side Barhill made it two wins from two to go top of the table with an impressive 9-2 win over Cadishead Rhinos.

Amazingly that wasn’t the biggest win of the day as Tameside United defeated Bury Amateurs 10-0 at home to sit behind them only on goal difference.  Curzon Ashton Reserves thrashed Swinton 7-0 away despite finishing the game with 10 players following a first half sending off.  Moston Brook picked up their first win of the season, whilst condemning Flixton to their first loss as they won a thriller 4-3 away from home.

In the Cheshire Women’s League Sale United got off to a disappointing start to the season when they were well beaten by near neighbours AFC Stockport 6-1 at home with Louise Beaumont scoring the only goal for the home side.

In Division Three, Manchester Rovers kick started life in a new league in emphatic fashion as they thrashed Altrincham Hale 8-0 away. 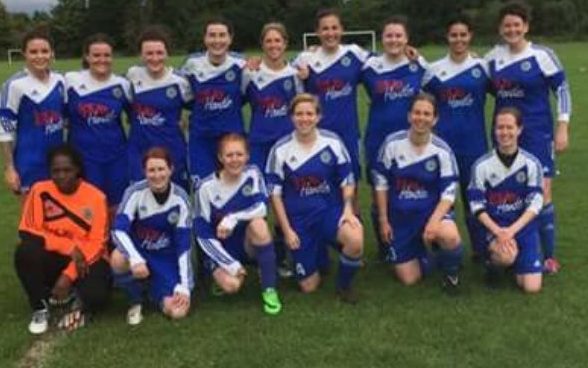