Manchester City retained their 100% start to the new season with a 5-2 win away to Reading at Adams Park. Nadia Nadim made her City debut taking just 6 minutes to give the Champions the lead before Claire Emslie doubled the lead on the half hour mark. Reading rallied and leveled but Izzy Christiansen scored to ensure the visitors headed into the break with the lead.  In the second half Jill Scott added two goals in three minutes to ensure they returned north with all three points.

City’s lead at the top remains two points thanks to Chelsea winning 3-2 at home to Arsenal. 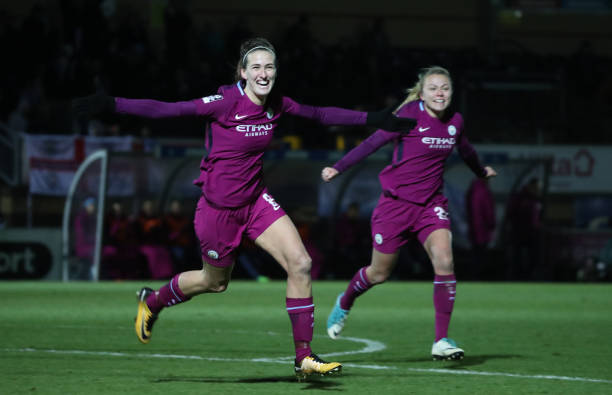 Manchester Stingers started 2018 with a defeat as they lost by the odd goal in five to Tranmere Rovers at Kings Road. Despite dominating the first half and goals from Angie Ashiotti and Shelley James the Stingers were defeated 3-2 to leave the Bee’s in 8th. The Chorlton side will be looking to bounce back with the trip to bottom club CMB next Sunday before they face Cadishead Rhinos in the Manchester County Cup in two weeks’ time; a competition they won back in 2016.

In Division One South, with several key players missing, Curzon Ashton were held 1-1 away to Liverpool Marshall Feds Reserves. Carina Mendes gave Feds the lead under new manager Jess McNally before Amy Smith brought the Nash level with a screamer.

Curzon remain second but hot on their tales are West Didsbury & Chorlton who survived a scare at the Cheshire FA as they came from two goals down to beat Northwich Vixens 4-3. A Michelle Lee volley had given Vixens an early lead before Chaneece Reeves brought them level; however two goals in five minutes saw the Vixens take a 3-1 half time lead. However West rallied thanks to goals from Leigh McFadyen, Nat Callaghan and a second from Reeves. The win see’s West lift themselves to fourth, six points behind Curzon in second with six games in hand.

The Division One title race continues to be a thriller as Beechfield United and Didsbury both registered winning starts to 2018.  Beechfield had the result of the day as they ran in 10 against lowly Crompton to improve their goal difference to 10 over second place Didsbury. Didsbury handed Bolton Lads & Girls only their second defeat of the season as they won 3-0. It leaves both teams level on points whilst Bolton remain in third, 9 points behind both teams but with three games in hand.

There were three games in Division Two to survive the weather as the title race remains in the balance thanks to the disparity in the number of games played between teams.  Cadishead Rhinos had the result of the day as they thrashed pointless Bury Amateurs 11-0 at the Partington Sports Village whilst Sale Ladies extended their lead at the top to 5 points with a 3-1 win away to Tameside United. Rochdale remain hot on their heels however as they beat Moston Brook 4-2 to leave them 12 points behind the leaders but with six games in hand.

In Division One, Runcorn Linnets and Wythenshawe Amateurs were the only side to survive the cold weather as the Ams strengthened their hold on the league lead with an impressive 4-1 win at the Millbank Linnets Stadium.

In Division Two, Sale United came from a goal down to beat Stockport County HNR 2-1 with Amy Rothwell and Laura Trotman scoring the goals. The win lifts Sale United to second five points behind the leaders.