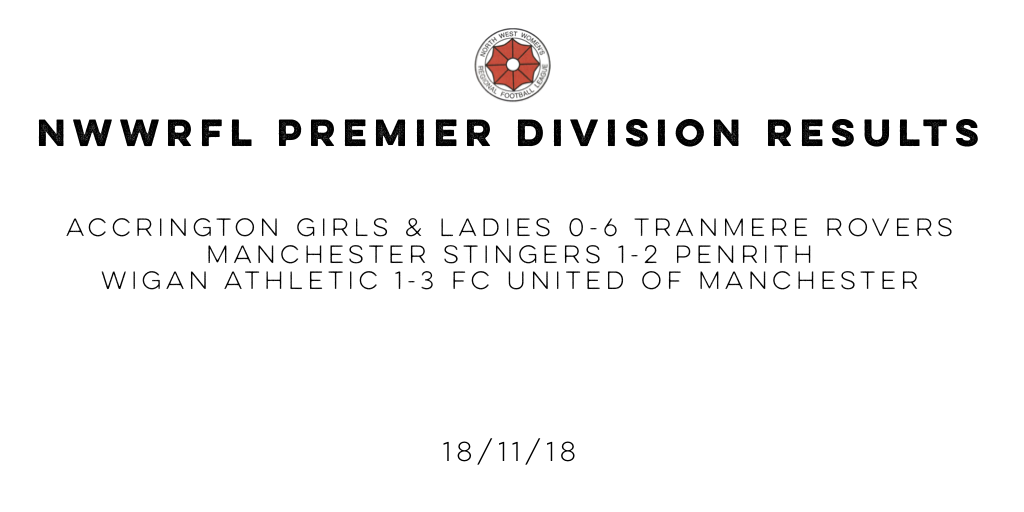 Tranmere Rovers are top of the league after a 6-0 win way to Accrington Girls & Ladies.

Kate O’Gara gave FC United the lead after just a minute away to Wigan Athletic on their way to a 3-1 win.  Rebecca Foster doubled the lead after 13 minutes with Wigan pulling a goal back three minutes after half time.  However five minutes from time Jess Battle made the game safe to hand the Rebels their fourth league win of the season.

Manchester Stingers were beaten 2-1 at home to Penrith despite an Aly Hastie penalty 12 minutes from time.  Heather Hawkes and Olivia Johnston was on target for the visitors as the win lifted them out of the relegation zone.

There was just one game in the North section of Division One this weekend and Bury took full advantage as they defeated Morecambe Reserves 3-1 at Lower Gigg Lane.    Alisha Marsh gave the Shakers the lead with an impressive run and finish down the left hand side before Lucy Golding doubled the lead with a long range effort over the keepers head.  The third came courtesy of a perfect through ball releasing Sophie Rowlands who finished superbly into the bottom right hand corner. The win lifts Bury into fourth place just two points behind Blackburn Community in second with two games in hand.

Preston North End and Blackpool was postponed whilst Crosby and Penwortham failed to raise teams away to Carlisle United and Workington Reds respectively. 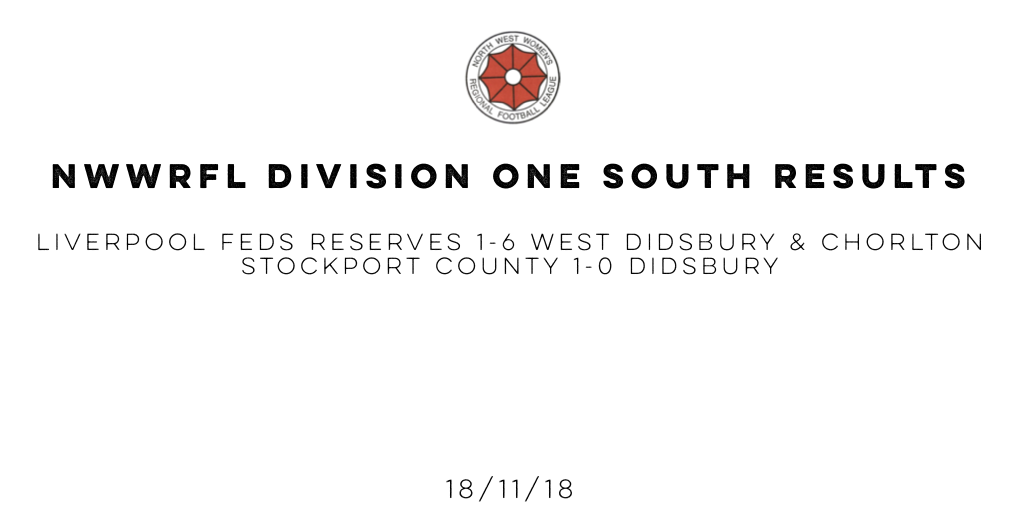 There are new leaders in the Division One South as Altrincham returned back to the top of the league despite not even playing.  Goal difference saw the Robins return to the top of the league as Liverpool Feds Reserves were beaten 6-1 at home to West Didsbury & Chorlton.  0-0 at half time the game burst into lift as West scored three times in 10 minutes through Rachael Dunlop, Elizabeth Livesey and Chloe Spencer.  Dunlop completed her hat-trick before Chloe Spencer added the sixth with a free kick.  The win lifts West up to sixth place just three points behind the leaders with three games in hand.

Stockport County Blues were 1-0 winners at home to Didsbury to lift them up to fifth place.

Salford City Lionesses made it six wins from six with a 5-2 win away to Langho. The goals came thanks to a brace from Laura Tobin, Jade Boulton, Fliss Winters and Beth Tattersall.

Hot on their tails at Barr Hill who join them level on points thanks to a 6-0 win over Rochdale.  The goals came courtesy of a Philippa Wakefield hat-trick, a Monique Ferrell brace and Harriet Houghton.

The lead for the Division Two title race has changed hands again as Tameside United are now top thanks to a 3-1 win away to West Didsbury & Chorlton Development.  Despite a goal from Anna Broadie Swinton were held at home to Heyside with a 1-1 draw.  The weekends results leave the top three separated by just two points.

Northwich Vixens were 7-1 winners away to Cheshire League side Egerton thanks to a pair of braces from Stacey Connor and Sorcha Bramhall with Jennifer Jacques, Kathryn Hulme and an own goal rounding off the scoring. They will face Upton away in the next round had a home walk over Wallasey Athletic.

Altrincham eased into the second round with a 6-0 win over Sandbach United.  Imogen Paul, Geo Ashton, Jade Hesketh (2), Debbie Price and debutant Leigh McFadyen were all on target for Altrincham. They will travel to Warrington Wolverines in the second round on January 20th.

Chester FC enjoyed their visit to the Swansway Stadium in fine fashion as they ran out 12-0 winners over Sale United.   Chester will travel to Cammell Laird in the second round who were 3-2 winners away to Brookvale United and Stockport County were awarded a home walk over against Ashville. County have earned themselves a buy into the quarter finals.

Fleetwood Town Wrens put up a valiant effort at home to holders Blackburn Rovers as they were beaten 6-1 at Pool Foot Farm.  The Wrens took a 7th minute lead before Rovers levelled a minute later through Eve Kennerley. Jess Holbrook will claim the second to put Blackburn in front on 17 minutes with Lagan Makin making it 3-1 on 31 minutes to ensure a half time lead for the visitors.

Jess Holbrook forced a second own goal just before the hour mark to make it 4-1 as Bethany Donoghue made it five on 75 minutes and the Captain Lynda Shepherd rounded off the scoring with 10 minutes remaining.

Blackburn Community were 2-1 winners of Sir Tom Finney  thanks to an Amy Bland volley on 56 minutes before a 30 yard free kick from Ruth Harrison made it 2-0.  The visitors pulled a goal back in stoppage time.