Now that the County competitions have concluded for the year and the NWWRFL involvement in the FA Cup is down to one participant its finally back to the business of the league for most Premier Division clubs.

FC United travel to Accrington Girls & Ladies on the back of an important 3-1 win away to Wigan Athletic which went someway to arresting their form which had seen them lost twice in three games for the first time in well over a year.  The Division One South Champions and Argyle Sports Cup holders have become well accustomed to winning under Manager Luke Podmore and another three points on Sunday will no doubt reconfirm the Rebels credentials for a second successive promotion.  They travel to an Accrington side who’ve suffered four straight league defeats and sit in the final relegation place.

Unbeaten in four Merseyrail will shake off the disappointment of a weekend without a game as they face the challenge of becoming the first side to defeat Stockport County this season.  The Hatters have one of only two 100% records remaining in the league this season and are through to the second round of the Women’s FA Cup but the Rail are unbeaten in the last four having collected their first win of the season in a 6-2 win versus Penrith two weeks ago.

Second placed Mossley Hill Athletic travel to bottom club Sir Tom Finney who collected their first point of the season with a 2-2 draw against Manchester Stingers two weeks ago.  Mossley Hill’s most recent result saw them beat Penrith 5-0 who in turn beat Manchester Stingers at the weekend. It’s another tough test for Stingers this Sunday as they travel to league leaders Tranmere Rovers. Fourth placed Wigan Athletic host 7th placed Fleetwood Town Wrens with both looking to get back to immediate winning ways. 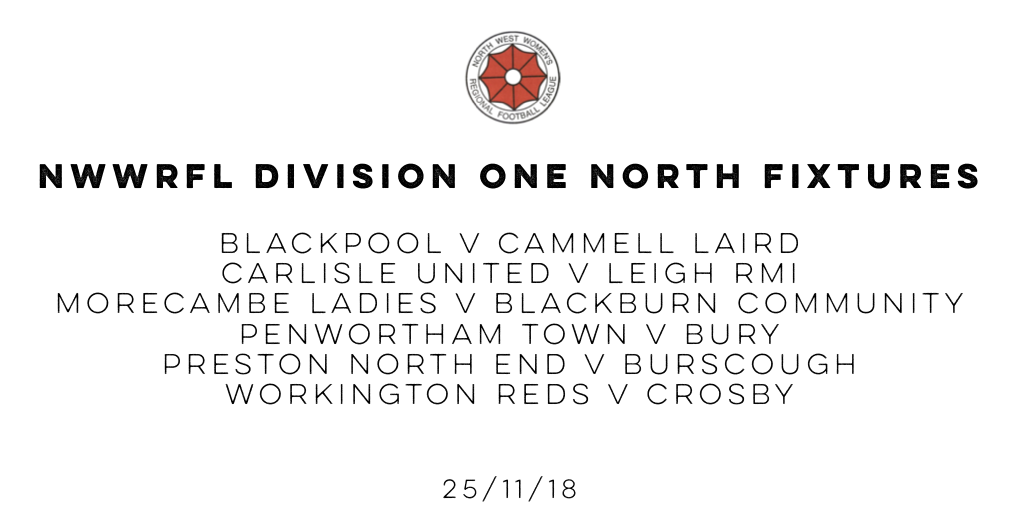 Eight points and a 115 mile round trip separate Blackpool and Cammell Laird into Sunday but both sides will be looking to make that number change come 5pm.

With one game surviving in Division One North last weekend, Bury’s 3-1 win against Morecambe Reserves, it’s very much as you were at the top of the table but three points for ‘Lairds’ this Sunday will very much bring them, and the chasing pack, into contention for promotion come the end of the season.  Home field advantage and history favours the tangerines who recorded a 4-1 win away to Lairds back in September and remain unbeaten in the league this season. Lairds sit third having won five out of six since that weekend having scored 34 times in the process.

Having made it six league wins in a row last week as they defeated Morecambes Reserves at Lower Gigg Lane to move themselves up to fourth.  Another three points away to Penwortham Town on Sunday will move them closer into contention for the top spot which remains in their own hands albeit having lost to Blackpool on the opening day of the season. Penwortham Town head into the game on Sunday in mixed form; having been unable to field a team at Workington last Sunday after having beaten bottom club Burscough Dynamo the week prior. The side promoted this season will be hoping to recapture their October form which saw them register three consecutive wins in which they scored 22 goals in three outings.

Second placed Blackburn Community travel to face a Morecambe Reserves they will face meet in the Argyle Sports Cup in January. Carlisle United will look to make the jump into the top three with a home tie against ninth placed Leigh RMI. Crosby make the long trip to Workington Reds whilst Preston North End welcome Burscough Dynamo in a relegation six pointer.

Seventh place Chester head into the weekends game against leaders Altrincham incredibly just four points behind the leaders.  Chester are coming off an afternoon to remember as they hosted Sale United at the Swansway Stadium defeating their Cheshire League opponents 12-0 to advance in the Cheshire Ladies Cup.

Chester will be looking to build on the momentum of back-to-back wins (the other coming in a 5-1 win away to Wythenshawe Amateurs) and avenge a 3-0 loss away to Altrincham suffered on the opening day of the season.

It’s been a month since leaders Altrincham were last in league action having seen a game against Wythenshawe Amateurs postponed and having defeated Sandbach United in the Cheshire Ladies Cup in the interim period. Despite their absence from the league action, the Robins have regained their status at the top of the table, as Liverpool Feds Reserves goal difference took a hit at the hands of West Didsbury & Chorlton last Sunday, only further demonstrating the fine margins at the top.

Altrincham were boosted by the arrival of Leigh McFadyen, who scored on her debut last week, from West Didsbury & Chorlton and will be determined to prove that their return to the top of the table isn’t a temporary fix with promotion very much in their own destiny.

It would be fatalistic to look at West Didsbury & Chorlton v Curzon Ashton on Sunday as a foregone conclusion; despite the fact that when the two teams met in cup action back in September in provided a 14 goal thriller that saw West run out 11-3 winners.

Curzon head into Sunday’s game in fourth place, just two points off top spot having been denied top spot by Warrington Wolverines in a 1-1 draw two weeks at Grappenhall Sports.  The Nash are free scoring, having scored thirty five times in the league already this season with Amy Smith and Parris Welsh leading the way amongst the goals.  The last league meeting between the two sides also saw a thriller as Curzon raced into an early 3-0 lead before West rallied to score five unanswered goals before eventually running out 5-4 winners.

West have won all five of their league games to date and will be keen to earn another three points as they look to play catch up to the divisions leaders. Wins against both first and second in the table in recent weeks has creditability to the title credentials of last season’s runners up.

Liverpool Feds Reserves travel to Stockport County Blues who will be buoyant on the back of a 1-0 win at home to Didsbury. Didsbury travel to Warrington Wolverines who safely navigated past Runcorn Linnets in the Cheshire Cup last weekend and hoping to kick start their league form which has seen them win just one of their last four league games (13-0 away to City of Liverpool). Didsbury will be aiming to turn improved recent performances into results and collect their first points since a 0-0 draw at home to Chester back in September.  Northwich Vixens will be hoping to complete a league double when they travel to Hollyhedge Park to face Wythenshawe Amateurs who have still collected just a solitary league point this season.