Stockport County made it seven wins from seven in the league as they emerged 2-0 winners at home to Merseyrail. Chloe Mapp opened the scoring in the first half as Holly Stokes added the second in the second half as the Hatters were forced to promote a number of players from their development squad including Stokes.  The win extends Stockport’s run to 10 wins in all competitions ahead of their trip to Middlesbrough next weekend in the SSE Women’s FA Cup.

It wasn’t enough to lift them back to top spot, despite having four games in hand, as Tranmere Rovers defeated Manchester Stingers, winning 2-1 despite a goal from Nic Armstrong, to remain three points clear at the top of the table.

Despite a goal from Ash Taylor third place Mossley Hill Athletic were held at home by bottom side Sir Tom Finney as the visitors secured a 1-1 draw for their second point of the season. Fourth place Wigan Athletic were beaten at home by Fleetwood Town Wrens as the seventh placed side earned a 1-0 win thanks to a goal from Abbey Pullen.

FC United are up to fifth place but they had to survive a scare away to Accrington Girls and Ladies as they came from behind twice to earn a 4-2 win.  Becky McEwan gave the home side the lead before Jess McCarrick levelled. Accrington retook the lead through Helen Lynskey but three goals from Cara Field, Jess Battle and Aimee O’Keeffe earned the Rebels three more points in their quest to close the gap to the top of the table.

The Blackpool promotion train continues as they extended their unbeaten run in the league to 11 matches thanks to a 1-0 win at home to fellow promotion chasers Cammell Laird 1907.  Defeat for the Laird’s sees them drop to fifth as Blackburn Community, Bury and Carlisle United all picked up wins.

A Sophie Flynn brace with goals from Lily Crompton and Laura Murray saw Blackburn Community run out 4-1 winners away to Morecambe Reserves and keep the pressure on the league leaders Blackpool.  The gap sits at seven points but Blackburn have a game in hand over the Tangerines.

Bury are up to third and their destiny remains in their own hands as they secured a 3-1 win away to Penwortham Town. Sophie Rowalnds gav Bury the lead before Lucy Golding added the second with the Bury captain adding the third from the penalty spot. The Shakers have now won seven straight league games, remain eight points behind Blackpool but have three games in hand over the leaders.

A first half hat-trick from Chelsea Norris with goals from Rachael Deer and Kerri Mallinson gave saw Carlisle five goals to the good at half time before Deer added her second in the second half. Leigh offered resistance through goals from B.Boardman, L.Boardman and Lee as they slumped to a 6-3 defeat. 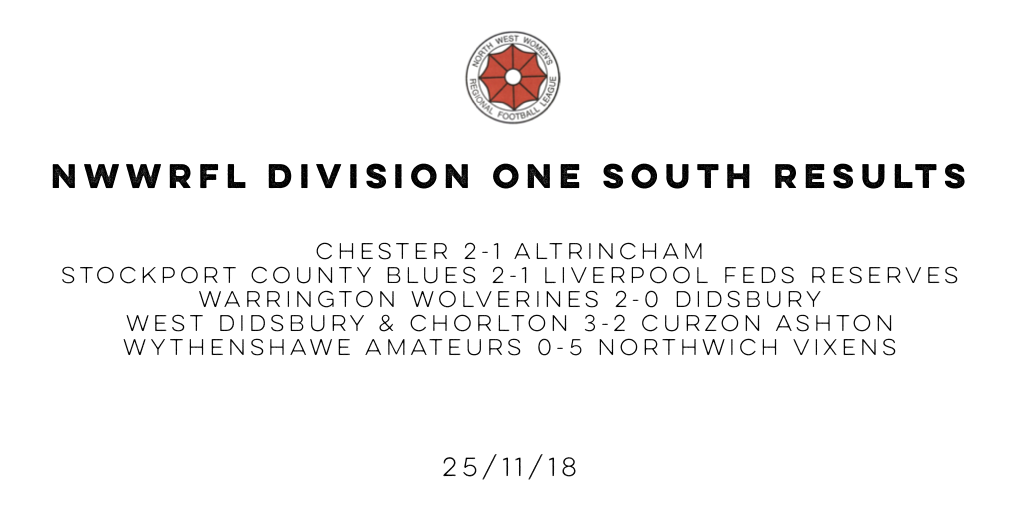 There are new leaders at the top of Division One South as Warrington Wolverines ran out comfortable 2-0 winners at home to Didsbury.  Sam Hassell scored again for Warrington, her ninth goal in the last six appearances before Leah Weaver added her second goal of the season to double the Wolverines lead.

Stockport County Blues are up to second as they registered an impressive 2-1 win at home to Liverpool Feds Reserves. The win has seen the Blues win five of their last seven matches as they’ve shot up the Division One South table.

West Didsbury & Chorlton are into third but had to survive a late scare against a depleted Curzon Ashton side.  West ran into an early two goal lead through a Sophie Bracegirdle brace but were pegged back by a goal from Mya Holmes shortly before the break. Stephanie Upsell levelled shortly after half time for the Nash but West secured three points and extended their 100% record in the league late on thanks to a late Rachael Dunlop penalty; the West strikers 16th goal of the season.

A Sorcha Bramhall hat-trick and a Michaela Thompson brace piled on the misery as Northwich Vixens ran out 5-0 winners away to Wythenshawe Amatuers. Defeat capped a miserable week for the Ams as they were deducted two points for their non-fulfilment of a fixture against Altrincham on November 4th sending them to the bottom of the table on -1 points.

Chester came from behind to defeat Altrincham in the Cheshire Derby thanks to two penalties as they secured a 2-1 victory at the Ellesmere Sports Village.  Altrincham took the lead through Jade Hesketh after less than a minute before Chester were awarded a penalty on 10 minutes. Lucy Adderley converted before converting a second just before half time. Chester are seventh in the re-adjusted league table whilst Altrincham drop from first to fourth.