The Road to Wembley is over for another season for the NWWRFL and its clubs as Stockport County were narrowly beaten by Middlesbrough in the SSE Women’s FA Cup Second Round.

The injury-hit Hatters gave a great account of themselves in the North East despite a host of first team players missing and necessitated the call-up of several development squad players.  Despite this the visitors held their own thanks to goalkeeper Lauren Blackett in inspired form in the County goal with the defence breached late on as Eleanor Dale tapped in with 20 minutes remaining to get Boro the lead and their name in the hat for the next round. 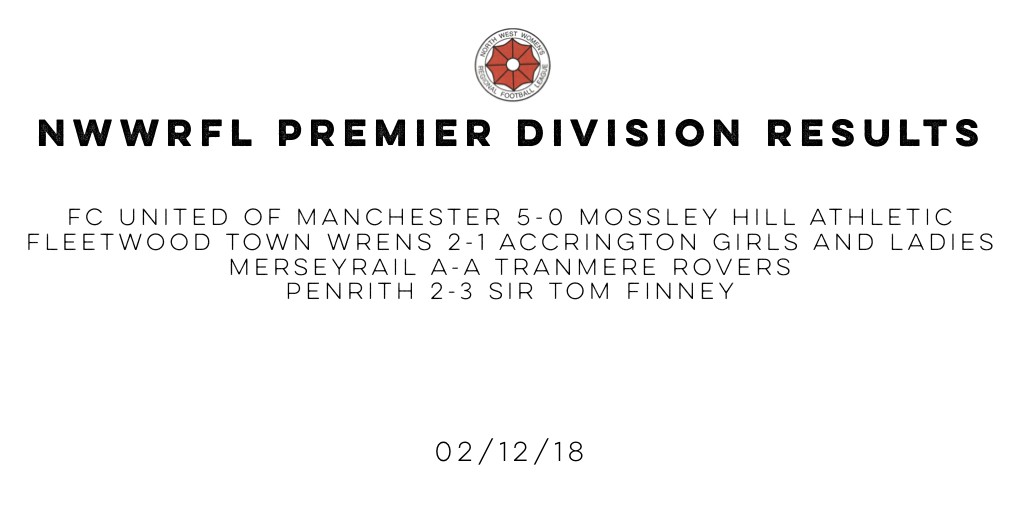 FC United lifted themselves to fourth with a 5-0 win at home to Mossley Hill Athletic. It was the home sides third consecutive league win since their defeat to Stockport County as they were inspired by another Jess Battle hat-trick. The FC striker gave them the lead after nine minutes before doubling the lead five minutes before half time with Kirsty Chambers making it 3-0 in stoppage time. Katie O’Gara made it 4-0 shortly after the restart with Battle completing her hat-trick just after the hour mark.  FC retain a 100% start since their switch to the Broadhurst Park main stadium.

Despite taking the lead twice through goals from Heather Fawkes and Sharina Robinson Penrith slipped to a home defeat against the improving Sir Tom Finney as they slipped to a 3-2 defeat. Despite the long trip the visitors fought back, levelling in the second half before finding the winning goal with 15 minutes remaining.  Three points for Sir Tom Finney brings them to within one point of safety with two games in hand over the teams immediately above them.

Lauren Oatley and Gemma Newson were amongst the goals as Fleetwood Town Wrens defeated Accrington Girls and Ladies 2-1 at Poolfoot Farm to lift themselves to sixth place.  Merseyrail v Tranmere Rovers was postponed after a serious injury to the Merseyrail goalkeeper.

Division One South has a new leader as West Didsbury & Chorlton defeated Didsbury 7-2 at the Recreation Ground. There was a flurry of goals for West in the opening stages scoring three times in the opening 20 minutes as Sophie Bracegirdle headed home before Vicky Lomas and Jami Hodges added their names to the score sheet. Didsbury pulled a goal back through Stacey Burton before hitting the post moments later.  Elizabeth Livesey restored West’s three goal lead before half time to make it 4-1.

In the second half free-scoring West made it five through an own goal before Nicole Denton made it 5-2 with a finish one-on-one for the visiting team.  The new league leaders ensured they went to the top of the table for the first time as they added goals late on through Hannah Mitchell and Amy Vyas; the latter’s first goal for the club.

Altrincham are back up to second after a 6-0 win away to second bottom club City of Liverpool.  The visitors showed impressive resistance and it took until the 39th minute for the Robins to break the deadlock through Jess Hartopp.  That goal saw the floodlgates open as Leigh McFadyen added two in the second half to make it 3-0 before Sophie Carolan and Megan Rowley made the game safe.  However there was still time for McFadyen to claim her first hat-trick for her new team in the final minute.

Liverpool Feds Reserves are back to up third place as they defeated Warrington Wolverines 4-2 at the Heron Sports Ground.  Warrington raced into a two goal lead as Sam Hassell’s impressive scoring run continued with a brace.  Feds responded with a goal from Molly Farley before Laura Bartrup netted a hat-trick to earn the home side all three points. 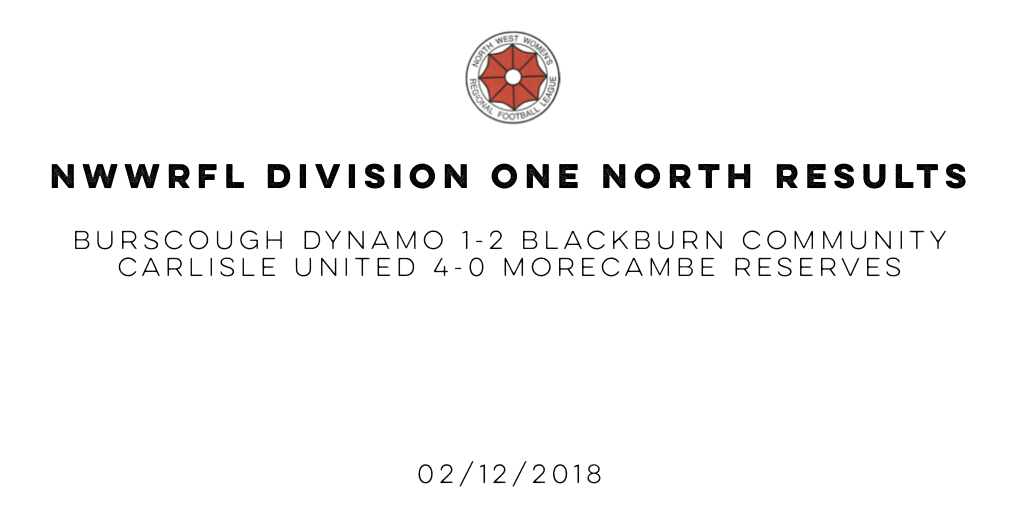 With the majority of the Division affected by the weather just two games survived in Division One South with Blackburn Community and Carlisle United both earning three points to move closer to leaders Blackpool.

Blackburn Community were 2-1 winners away to Burscough but were made to work for their three points.  Ruth Harrison scored early on for Community, adding her 5th goal of the season with a 30 yard effort.  The same came through an Amy Bland cross, turned home by a ‘thunderous’ volley from Captain Bec McGrath into the top corner. Kayleigh Bradshaw pulled one back in the second half and Burscough may have snuck a draw at the end in an evenly contested second half. Blackburn have now won six league matches in a row and have closed the gap to Blackpool to four points. Burscough remain bottom with a singular point from their nine matches.

A Kerri Mallinson brace with goals from Chelsea Norris and Cally Martin handed Carlisle United a 4-0 win at home to Morecambe Reserves to lift them to third and keep them in touch of leaders Blackpool. The win see’s the Cumbrian side extend their unbeaten run to four matches winning them all having scored 20 times. They sit five points behind Blackpool with an important game in hand.