The talking point of the weekend came from the John Bosco Arts College as Merseyrail v FC United of Manchester was abandoned in second half stoppage time following the visiting sides decision to withdraw the team.  FC United had initially raced into a 3-0 lead through a Jess Battle brace and Shaunna Jein before Merseyrail rallied back to draw level at 3-3. Aimee O’Keefe and Jess McCarrick were sent off for FC United.  Tessa Littler notched a brace of her own before Kaisha Sohl drew them level.  The Rebels re-took the lead through a fine goal from Kirsty Chambers before Merseyrail levelled in controversial circumstances as Emily Marsh was dismissed for a challenge in front of goal. Merseyrail made it 4-4 from the resulting free kick through Shelley James.  The game was brought to a premature end in stoppage time as FC United manager Luke Podmore, having been sent off by the referee in the first half, withdrew his team following the dismissal of Cara Fields to bring the total dismissals for the visitors to four.  A Merseyrail player was also dismissed in the same incident before the referee was forced to abandon the game.

Tranmere Rovers kickstarted their 2019 with an emphatic 7-1 win at home to Sir Tom Finney to stay six points clear of Stockport County in second place.  Hot on their tail is Stockport County who started their 2019 in style with a 9-0 demolition over Accrington Lads & Girls.  They got off to a great start thanks to Abi Hayes first goal for the club since joining from Curzon Ashton in the summer.  Hayes rounded her day off with a hat-trick only to be matched by Hanifa Douglas who notched her first hat-trick since returning to the club.  A Chloe Mapp brace and Sophie John rounded off the goals.

Despite a Nic Armstrong goal for the visitors, goals from Harriet Lewis and Rachel Lee brace saw Fleetwood Town Wrens overcome Manchester Stingers 3-1 on the Fylde coast.  Wigan Athletic were 5-1 winners at home to Penrith to lift them to third. 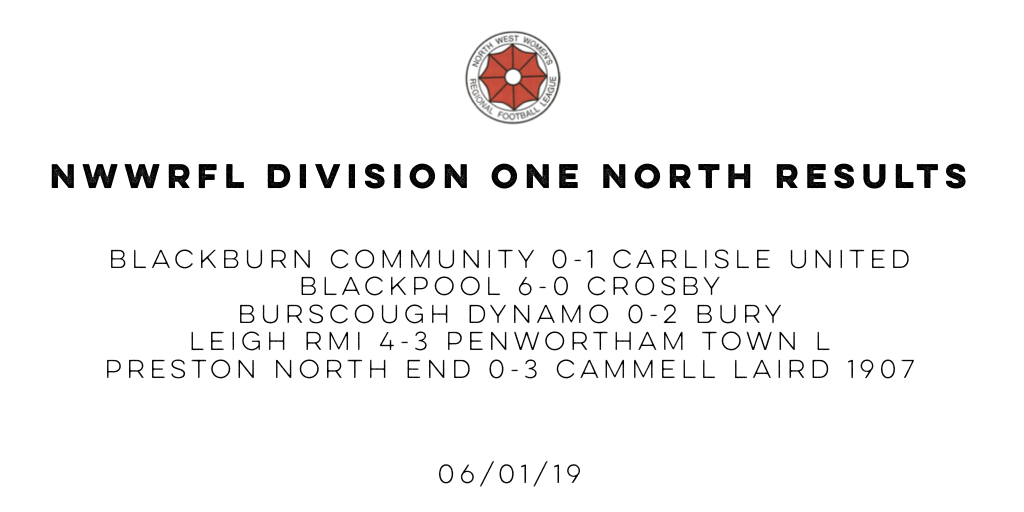 Blackpool have an eight-point lead at the top of Division One North thanks to a 6-0 win at home to Crosby.  The goals came courtesy of top goalscorer Lily Hambly (2), April Oldfield, Jenna Pannell and Gemma Thrower.

Bury are fourth thanks to a 2-0 win away to Burscough Dynamo through goals from Chloe Davies and Lucy Golding.  The Shakers are ten points behind Blackpool with three games in hand.  Cammell Laird were 3-0 winners away to Preston North End to keep them in fifth place.  Leigh RMI defeated Penwortham Town 4-3 in a thriller to lift them clear of bottom two.

Workington Reds are up to 6th with a 3-2 win over Morecambe Reserves.  Megan Hay opened the scoring for Workington as she finishing off Hayley Bracken’s pass before Sophie Brikett made it 2-0 on 24 minutes.  Morecambe pulled a goal back shortly before half time to reduce the deficit.  In the second half Morecambe drew level as they reacted quickest to a Reds goal kick before the resulting effort was lifted over goalkeeper Laura Miller.  With the game level both sides went in search of a winner with Workington find the winner as Hannah Green reacted quickest to turn it home from close range.

West Didsbury & Chorlton are the new leaders after a 4-0 win at home to Stockport County Blues.  West took the lead through Elizabeth Livesey in the first half before Shauna Edmondson doubled the lead from the penalty spot. The side with a 100% record was secured thanks to second half goals from Rachael Dunlop and Vicky Lomas.

Altrincham are second following a 2-0 win over previous leaders Liverpool Feds Reserves.  Altrincham took the lead on 35 minutes when Nadine Sproule tucked home the rebound after Leigh McFadyen was initially denied.  Geo Ashton secured three points in the second half when she curled an effort in from the edge of the penalty area.  Feds drop to third behind West and Altrincham on goal difference having played a game more than their opponents on Sunday.

Warrington Wolverines are fourth and just a point off the top thanks to a 4-0 win away to Wythenshawe Amateurs.  Sam Hassall, Cathy Dutton, Steph Doran and Gaynor Collins ensured another three points.

Chester were also huge victors as they defeated Didsbury 14-1 at Ellesmere Sports Village.  Rachel Lever opened the scoring before Emma Gray doubled their lead. Lever then added FIVE more before Didsbury pulled a goal back at 7-1.  Amy Broomhead added a goal before Gray completed her hat-trick to make it ten.  Amber Bailey made it 11-1 before Gray added her fourth.  Lucy Adderley made it 13 from the penalty spot and Gray rounded off the scoring with her fifth. Chester are sixth, five points off fifth and will be wondering what might have been had their game against City of Liverpool not been abandoned with the team leading by 10.