There are three big games for the division’s top three sides as Tranmere Rovers, Stockport County and FC United all find themselves on their travels.

Leaders Tranmere head to the coast where they will face a Fleetwood side looking to bounce back from a 4-1 home defeat to Mossley Hill which had ended a run of five straight victories in league and plate.  Before their run of five straight wins it was Tranmere Rovers who had defeated Fleetwood in the return fixture running out 4-2 winners.  Tranmere have won eight of their last night league and cup fixtures with the only loss in that time coming at home to Stockport County.

Supporters of Tranmere Rovers and FC United will find themselves Merseyrail supporters for the afternoon as they host second placed Stockport County.  Merseyrail have picked up their form in recent months and remain unbeaten in their last six league and cup games dating back to the beginning of December. It might have been seven but for the last minute abandonment of their game against FC United with the score stood at 4-4. Regardless of the unresolved nature of the fixture; it demonstrates that Merseyrail, on their day, can contend with anyone in the league.

Stockport County’s record is there for all to see as they boast a 100% record in the league and remain in the hunt for silverware on three fronts as they have reached the semi-finals of the Cheshire County Cup as well as the quarter finals of the Argyle Sports Cup, which, last season they finished runners up in. The Hatters will perhaps be glad to get back to league play having not played in the competition since January 27th; a 6-1 win over Accrington.

Travelling in the same direction as Stockport, FC United head to Merseyside having proved last weekend they’re not reliant on one player for their impressive goal scoring.  Despite losing leading scorer Jess Battle early in the game due to injury; Captain Kirsty Chambers stepped into the breach notching eight goals as they ran rampant against Accrington winning 13-0.  This weekend they face a Mossley Hill Athletic side whom they defeated 5-0 at Broadhurst Park in December and will be keen to keep the pressure on the top two having cemented third spot last weekend.  Mossley Hill currently sit fourth and will be looking to build on their 4-1 win over Fleetwood Town last weekend.

Eighth placed Manchester Stingers host fifth placed Wigan Athletic at Kings Road with Stingers looking to build on their 7-1 win from last weekend and close the gap to the middle of the table. Wigan take to the field for the first time in two weeks looking to build off the back of a 2-0 win over Liverpool Feds Reserves in the Plate. 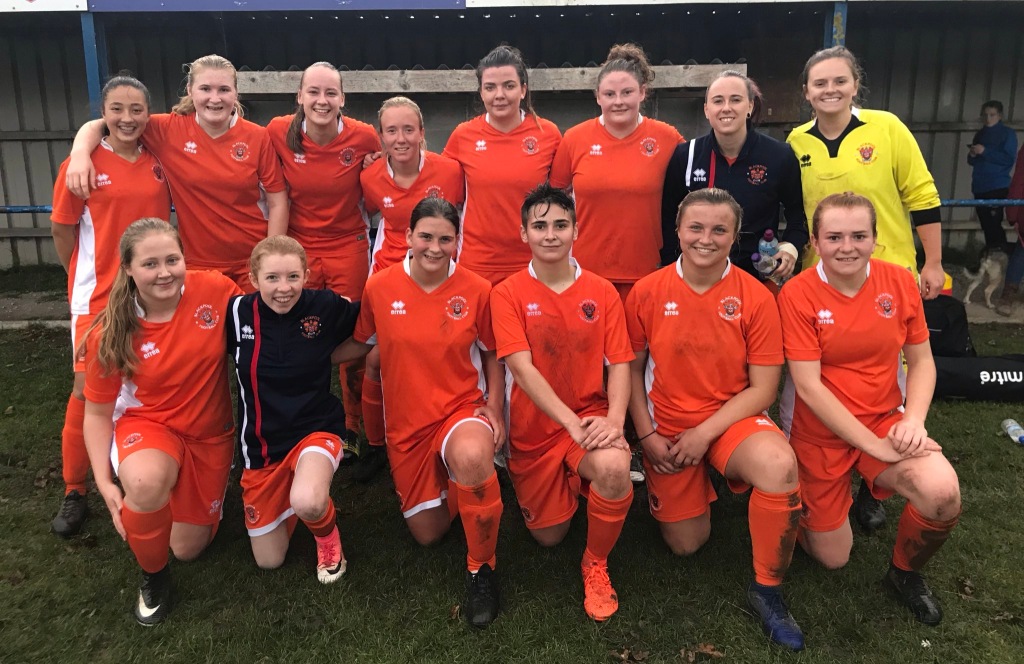 Division One North’s title race burst into flames last weekend when Blackpool’s long unbeaten run was finally ended by Bury as they were defeated 2-1 at Carrington.  This week they face the trip to Cumbria where they will take on a Carlisle United side who suddenly find their destiny in their own hands again.  Seven points currently separate first and second but Carlisle boast two games in hand over the Tangerines. Despite their first set back off the season Blackpool will take comfort in the fact they ran out 3-0 winners in the reverse fixture but Carlisle have won five and drawn one of their last six league fixtures dating back to October.  Its sure to be a fantastic fixture.

Having at least one eye on the score from Cumbria are Bury host Penwortham Town.  The Shakers defeated Penwortham in the Argyle Sports Cup 9-0 back in January and will be hoping for a similar positive result this weekend as they look to further close the gap at the top.  The divisions other two games sees Leigh RMI host Blackburn Community and Morecambe Reserves welcome Preston North End.

There are some potentially season defining fixtures in Division South on Sunday as top of the table Liverpool Feds Reserves travel to Chester and Curzon Ashton travel to Didsbury.  Having beaten Northwich Vixens 5-0 the week before Chester will be looking to bounce back from their 5-0 defeat away to West Didsbury & Chorlton last weekend.  Aside from their defeat to West, Chester are yet to be beaten at home in the league and will be looking to avenge a 2-0 loss to Feds back in October when the Lions started with six straight away games.  Feds form away has been less impressive than their home form having won four and lost three of their away league fixtures but have won their last three league fixtures scoring 26 goals in the process.

The re-arranged meeting of Didsbury versus Curzon Ashton takes place on Sunday; a fixture previously postponed with both teams on site as Didsbury Sports Ground forgot to tell either side the pitches were waterlogged.  Didsbury head into the game off two tough Argyle Sports Cup and Plate losses to Division One North opposition and were beaten 12-1 by Curzon in the reverse meeting in January.  Curzon will be buoyant by their 4-1 win over Altrincham last weekend and will be full of confidence that three points on Sunday will give them a chance at a top two finish…at minimum.

Trying to keep pace with the leaders are Altrincham who travel to Park Stadium to arrest their away form which has seen them collect just six of 21 points available.  Following a managerial change Altrincham have exited the cup and lost their first league fixture of the Wayne Goodison era having and have seen talented midfielder Imogen Paul depart for GMWFL side Barr Hill.  On more positive news for Altrincham they’ve launched their new twitter account (@AltrinchamLFC) and will be hoping to christen it by completing a league double over a Northwich Vixens side they defeated 4-2 at home. Sunday will represent just the third time since November that Vixens have played in a NWWRFL sanctioned competition but the team whose won five and lost five of their 10 league games this season will be looking to build on their Cheshire Cup quarter final win last weekend.