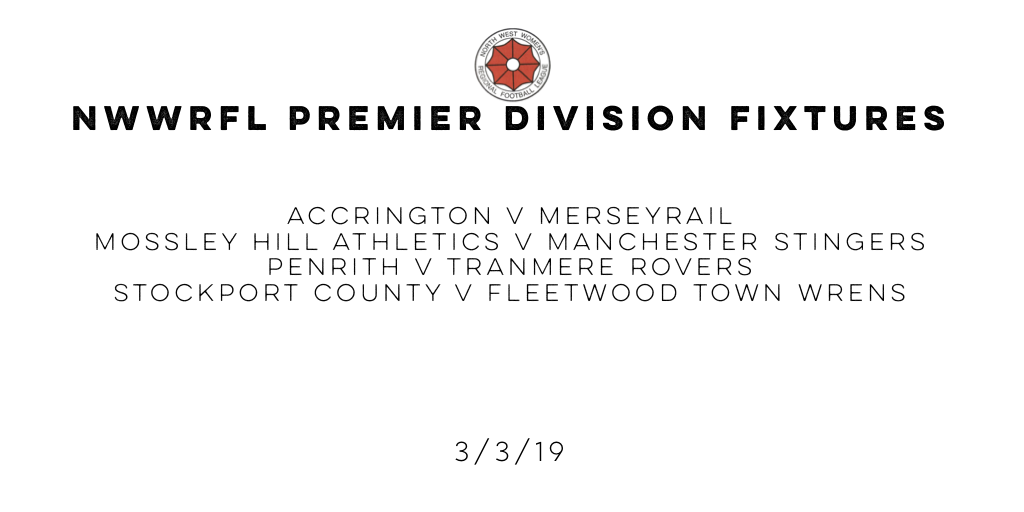 They say the easiest thing to do is to reach the top of the table but the hardest thing to do is stay there. This weekend Stockport County will have their first defence of top spot in NWWRFL Premier Division as they host Fleetwood Town Wrens at the Stockport Sports Village. County made it 11 wins from 11 last weekend thanks to a last minute winner in a 3-2 win over Merseyrail last weekend to leapfrog Tranmere Rovers.

This week they will welcome a Fleetwood Town Wrens side who helped them reach the summit as they defeated Rovers 3-1 at Pool Foot Farm.  Fleetwood will be buoyant by their result last weekend and will no doubt be looking to finish the season strongly with a top four finish a real possibility. The two teams met on the coast last November with the Hatters etching out a narrow 2-1 win and both sides will be confident of a result this time around.

It’s a big afternoon for the division’s bottom three clubs as they start the weekend level on points but with varying number of games played as well as many as a 28 goal differential in the plus/minus column.  Sir Tom Finney in 9th (played 11, -19 goal difference.) have shown great form in recent weeks, boosted by a 3-2 Cup win over Warrington Wolverines at the weekend but will face an FC United side who, having won away at Mossley Hill last weekend, will be in the hunt for a second successive promotion. Penrith (played 12, -28 goal difference) welcome a Tranmere Rovers who’ll be after an instant reaction after their defeat last weekend.  Penrith will be hoping the emotion of a penalty shoot-out win last weekend and a resilient performance in the reverse fixture, losing 2-0, will keep their momentum going.    Accrington (played 12, -57 goal difference) are in bad need of a positive result having 12 games in a row whilst conceding 43 goals in the last six games.  They will face a Merseyrail side still reeling from a last minute defeat to Stockport County losing 3-2 thanks to a last minute goal.

Note: Whilst there has been no confirmation on promotion/relegation from the NWWRFL it’s assumed (by us) that the Premier Division will continue to operate with a full complement of 12 clubs next season.  With just 11 teams that would suggest just one team are relegated on the basis that if Crewe are relegated from the WNL Division 1 North they will replace the winners of the Premier Division.

The weekend’s final game see’s 5th placed Mossley Hill host 8th placed Manchester Stingers with the Merseyside team looking to complete a league double having won at Kings Road 5-1 earlier in the season.  Both teams are coming off the back of weekend defeats and will be looking to finish the season strongly against what both sides will see as winnable opposition. 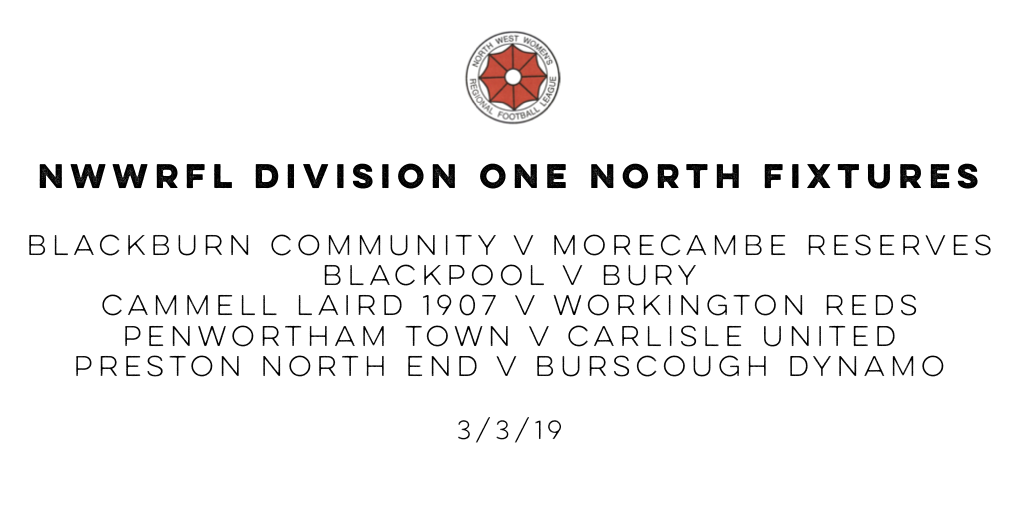 If we can ask two things from March that we’ve seen in February its Sunshine and the continued excitement that the title race in the Division One North has brought us.  At the start of February, Blackpool’s lead at the top of the table was 10 points as they remained unbeaten in the league.  Fast forward to the first weekend in March and they could potentially see that lead cut to as little as four when they host Bury in a massive title deciding six-pointer this Sunday.  Some thought the Shakers might have missed their chance when they drew 1-1 away to Carlisle United at the end of January but back-to-back 2-1 defeats including a thriller at home to Blackpool sees their title destiny in their own hands with three games in hand and seven points behind.  The beauty of this weekend’s fixture though means should Blackpool avenge the defeat with one of their own; title destiny will return to the Tangerines once more.

With rumours abound that Burscough were looking to wind up in November its credit to the Dynamo that they’re still fighting for their place in the NWWRFL come March as they travel to Preston North End in a pivotal bottom of the table clash.  Whilst Crosby folding may have reduced the risks of relegation to the County Leagues with potentially as many as five County Champions looking for promotion, finishing bottom is a risk that both sides will want to avoid.

Having dropped points either side of Christmas to Bury and Carlisle United, Blackburn Community’s name has briefly slipped from the promotion picture but three points against Morecambe Reserves on Sunday coupled with the permutation of results elsewhere will turn a three horse race back into a borderline Grand National.  Likewise for Carlisle United who make the trip to Penwortham Town whilst Cammell Laird 1907 versus Workington Reds rounds off the weekends fixtures. 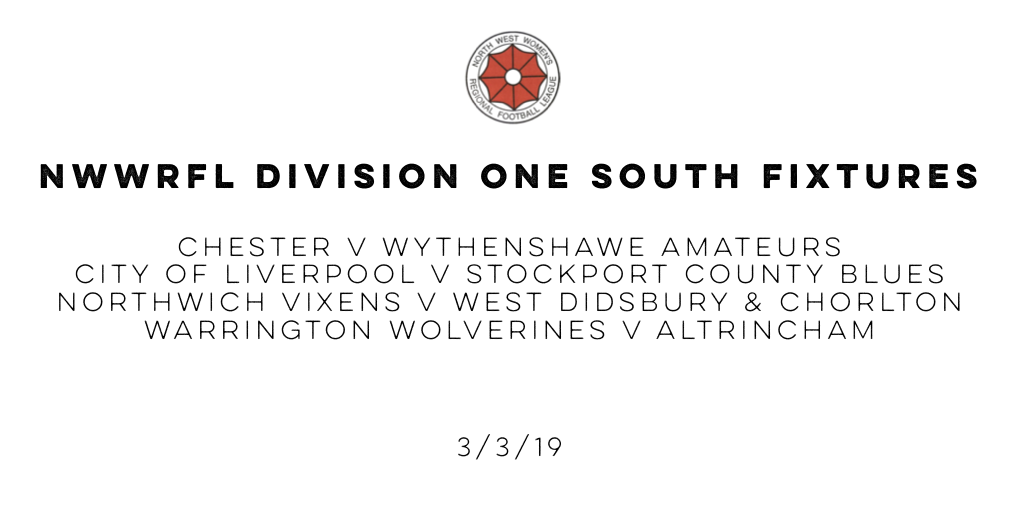 It’s very much Schrodinger’s promotion race in the Division One South as seemingly everyone and no-one wants to take control of the division’s summit.  6th versus 5th might seem like an odd choice as the pick of the weekend’s games as Warrington Wolverines host Altrincham.  However it’s a testament do the divisions strength that both sides, having spent much of the season around the top three with Altrincham having clocked the most weeks atop of the Division, have been squeezed away from the top spot by Curzon Ashton and Stockport County Blues.

This game should a have taken place three weeks ago only for Altrincham to pull out due to ‘unforseen circumstances’ which resulted in Manager Keith Edleston ending his association with the club.  It’s been a baptism of fire for new manager Wayne Goodison whose overseen back-to-back league defeats away to Curzon Ashton and Northwich Vixens.  At the helm of one of the divisions most determined sides however; the Alti players will no doubt inform him of their league victory against the Wolverines earlier in the season as they look to recapture their form they gave them such a formidable start.

West Didsbury & Chorlton could have closed the gap to Feds to one point last weekend but for City of Liverpool failing to field a team for the second time this season against the Manchester side.  No-one will be showing any sympathy for the side who still enjoy a 100% record in the league and least of all Northwich Vixens who host them on Sunday.

Chester will look to build on an impressive 1-1 draw at home to Liverpool Feds Reserves when they host bottom club Wythenshawe Amateurs.  Stockport County Blues travel to City of Liverpool with ‘The Purps’ hoping that they’re recent off field issues are behind them.