FC United maintained their 100% start to the season with a second win in four days against South Manchester opposition. Olivia Hooper gave FC United the lead on the hour mark but were pegged back a Rachael Dunlop goal for the Division One South Champions. However last season’s Premier Division runners-up secured three points thanks to two goals in the final 15 minutes as Kirsty Chambers and Jess Battle both found the net.

The Rebels are one of two sides who’ve made it two wins from two in the Premier Division as Mossley Hill, Morecambe and Tranmere Rovers all secured their second league wins of the season.  Tranmere are the league leaders following a 3-0 win at Poolfoot Farm over Fleetwood Town Wrens. Goals from Olivia Hulsmston and Georgia Walters gave Rovers a 2-0 half time lead before Jade Collins extended the lead in the second half.

Morecambe are second on goal difference following a thrilling 4-2 win at home to Wigan Athletic.   Hannah Paling, Georgia Lupton and Megan Doherty were on target for the Shrimps.  Mossley Hill made it a league double over Merseyrail thanks to a 2-1 win at Admiral Park.  Olivia Ellinson was on target for Mossley Hill.

Manchester Stingers registered their first win of the season as they came from two goals down at half time to win 3-2 at home to Sir Tom Finney. There was a brace from prolific goalscorer Nic Armstrong with Liz Poitier scoring the other goal.

Crewe Alexandra had the afternoon off as their game with Bury was postponed after Bury were unable to field a team for the second consecutive fixture.

The stand out performance from the weekend FIVE goals from Ameila Ripley gave AFC Darwen a 7-1 win over Accrington Stanley at Accrington Academy. Libby Bleasdale and Lynette Craig were also amongst the scorers for Darwen.

Blackburn Community are top of the league with a 100% record as they defeated Workington Reds 6-0 at home.  Victoria Smith opened the scoring with Amy Bland and Sophie Williams adding braces; Rebecca McGrath was also on target for Community.

Penrith also have a 100% record following a narrow 1-0 win away to Leigh RMI.  The goal came from Jodie English with the Cumbrian side also celebrating 100 appearances for defender Hannah Fawkes.

Blackpool registered a 3-0 win away to Preston North End in the Lancashire Derby with Lily Hambly and Sinead Doria on target for the tangerines with an own goal rounding off the scorers.

Chester are top of the league following a 6-2 win at home to Wythenshawe Amateurs.  Rachel Lever was “in red hot form” as described by the club’s website as she netted four times at Ellesmere Sports Ground.  Lever made it 1-0 early doors before Amy Smith doubled the lead before half time. Wythenshawe came back into the game reducing the deficit before Lever claimed her second and Rachel Kelly made it 4-1. Lever collected her hat-trick before making it 6-1 with the Ams adding a late second goal.

Curzon Ashton are hot on their tails, with the divisions only remaining 100% record, following a 6-0 win at home to newly promoted West Kirby.  Start in the making Nicole Thorpe gave Curzon an early lead from Olivia Chan’s cross before doubling the lead after converting from a Leoni Harland pass.

Amy Smith added to her collection of stunning goals with a rocket from a Mya Holmes pass to make it 3-0 at half time.  Smith made it 4-0 with a free kick after half time as Mya Holmes added a collector’s item goal of her own for 5-0.  Sophie Rowlands rounded off the scoring to make it 6-0. 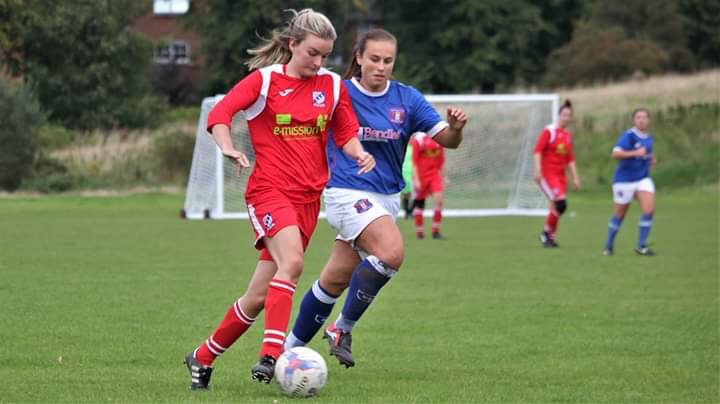